TATRA PHOENIX – the latest model of the Kopřivnice truck company – has won first place in the 13th edition of the “Best utility vehicle in Russia” competition in the “Prospect of the Year” category. The competition takes place every year and it is announced by a specialized branch magazine called “Commercial Transport”. 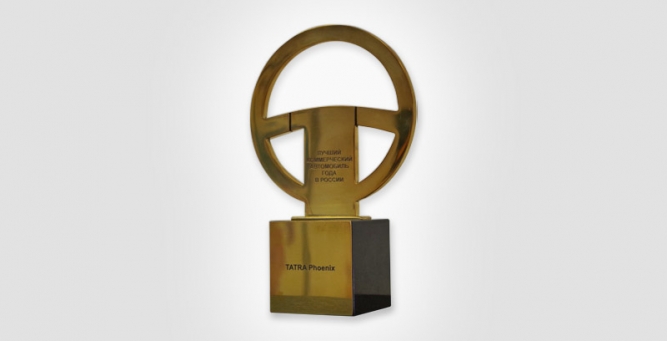 The competition results were officially announced in Moscow during the opening ceremony of the KOMTRANS 2013 trade fair, which is considered to be the leading commercial transport trade fair in Russia and the CIS. This year it is held from 10 September to 14 September.

The award, however, is not going to leave Moscow for Kopřivnice yet, as the Moscow trophy will be displayed together with the TATRA PHOENIX Arctic model at the Oil and Gas exhibition in Surgut from 25 September to 27 September 2013.

After that, this Kopřivnice 8x8 truck, equipped with an 18-sq.m dump body and special winter package for tough northern conditions, will be officially handed over to the Surgutneftegaz company for a 6-month trial operation.

Historically, TATRA trucks enjoy a very good reputation both in Russia and other CIS countries. It is great news that the latest model of the TATRA TRUCKS company got such an award on Russian territory and that cooperation with traditional Russian partners continues.