This year's IDET 2011 international exhibition of defense and security technologies will feature a display by TATRA, the first ever Czech automobile manufacturer. The 2011 TATRA display is based around the T 815-7 range of special-purpose trucks. 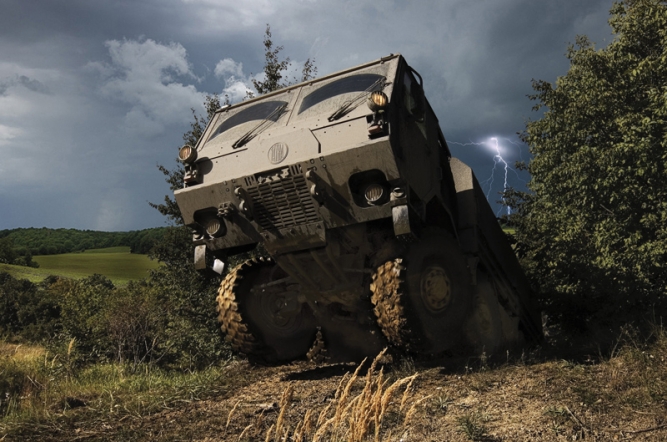 The standard range of vehicles (known unofficially as the 7-series) is designed for use in extreme climates and terrains, on peace missions and for combat use in military conflicts throughout the world. The chassis is based on a tried-and-tested design using a rigid backbone tube with independently suspended swinging half-axles. There are strong unification links between the individual models in the new range while the design allows for wide variation in engines and transmissions.

The 7-series vehicles can be fitted either with direct air-cooled TATRA engines (V8, turbocharged, with charge air cooler, meeting Euro 2, Euro 3, Euro 4 and Euro 5 emissions standards, without the need for an electronically controlled fuel injection system) or with liquid-cooled engines made by Cummins, Caterpillar, Navistar and other manufacturers. There is the option of either manual or automatic transmission. Besides their use as personnel carriers, the T 815-7 series can also carry munitions, military electronics, radar systems and other sensitive materials, and the trucks can be fitted with special containers or box bodies.

Thanks to the low vehicle construction including the all steel tilting cab, the T 815-7 series can easily be carried by C-130 Hercules transport aircraft.

The truck design allows the cab to be equipped with additional armor plating at several protection levels according to STANAG 4569.

The TATRA display in Exhibition Hall P and the adjacent open exhibition area will be dominated by the T 815-7 4x4 special-purpose vehicles with a platform body, the T 815-7 8x8 chassis-cab featuring a special fuel tank with anti-ballistic protection, the T 815-7 8x8 recovery vehicle with a Polish-made special superstructure, the T 815-7 6x6 chassis with container cross members fitted to this model as standard, and the special CAS 30 firefighting and rescue vehicle built by THT Polička on a T 815-7 6x6 chassis, which will also be featured at the Pyros/ISET 2011 exhibition of firefighting technology held at the same time as IDET 2011.

The open exhibition area will also feature the T 810, which was, as a successful customer project, designed and built specially for the Czech Army. After several years of use in the most difficult military operations, the T 810 design – featuring a ladder frame equipped with original portal TATRA Rigid axles – has proved its excellent performance, making it a proud standard-bearer for the TATRA design philosophy. The T 810 represents clear evidence of the talent, skills and hard work of the entire TATRA Kopřivnice team, from designers to assembly line staff.

Thanks to the performance, high utility value and low operating costs of the 3-axle T 810 6x6, this model was added to the TATRA civilian range last year.

In addition to the static vehicle displays, the TATRA presentation at this year’s IDET 2011 will also include, as a part of the exhibition accompanying program, a dynamic demonstration of two special-purpose vehicles at the event’s test track. One of these is a T 815-7 8x8 with a special Polish-made superstructure designed for recovering wheeled armored personnel carriers, and the other is a T 815-7 6x6 with a ‘flatrack’ system.

The CAS 30 firefighting and rescue truck will also demonstrate its capabilities at the aquatic testing and simulation facility.