A completely new armoured cab designed for special vehicle models was put into production together with introducing FORCE modernized cabs in the so-called soft design. The armoured cabs are installed on the vehicles directly in the Kopřivnice factory, sharing interior elements with the “soft version”. 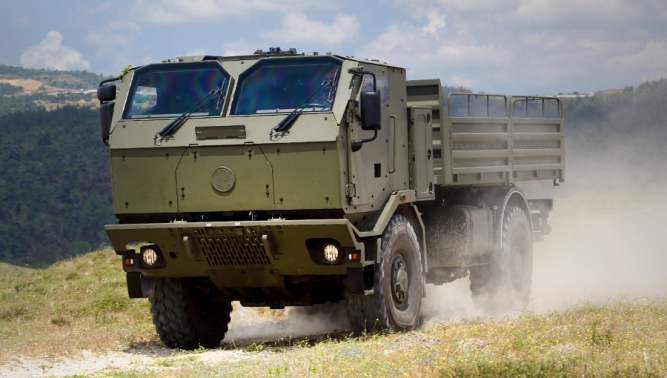 Jointly with an external company

TATRA TRUCKS has developed an advanced armoured cab for special vehicle models of the FORCE range together with an external company with years of experience in this field.

The new armoured cab is based on the original design of the modernized common variant of the FORCE cab. In accordance with NATO standards, it has been fully certified by the Military Research Institute in Brno to LEVEL 2a/b of ballistic and mine protection, and it features a protection setting option of up to LEVEL 3/b.

The cab comes in two-door and four-door design with a capacity of three (1+2) or five (1+4) seats. Both variants have the same height and the same interior design, including the material of the instrument panel. These armoured cabs with improved ballistic and mine resistance are also equipped with special seats, protecting the crew against a pressure wave in the event of an explosion under the cab. The roof of the armoured cab has a variable orifice to mount a weapon system on it.

The installation of the armoured cab on the FORCE vehicle required structural modifications to the vehicle chassis, especially in terms of the integrated mine resistance of the cab floor. The assembling length of the armoured cab is the same as that of the regular version, even in the four-door design.

Utilizing the manufacturing technologies of gluing and screwing of individual parts, the armoured cab was unveiled for the first time as a prototype at the international defence exhibition Eurosatory 2014 in Paris. The serial production was started up directly in the Kopřivnice truck factory of TATRA TRUCKS in 2016 and the first special vehicles with the new armoured cab have already been delivered to their customers. Hence, the Armed Forces of the Slovak Republic, as well as the Czech Army, have become users of modern vehicles with enhanced crew protection. We intend to present the vehicles in this version in cooperation with the Czech Army and the Military Research Institute at the International Defence and Security Technologies Fair IDET 2017 in Brno.