Starting this year, a new heavy truck line extends the special sector range of the Kopřivnice-based TATRA, a. s.. The defense or military program thus has at its disposal a state-of-the-art, competitive and at the same time highly efficient solution. 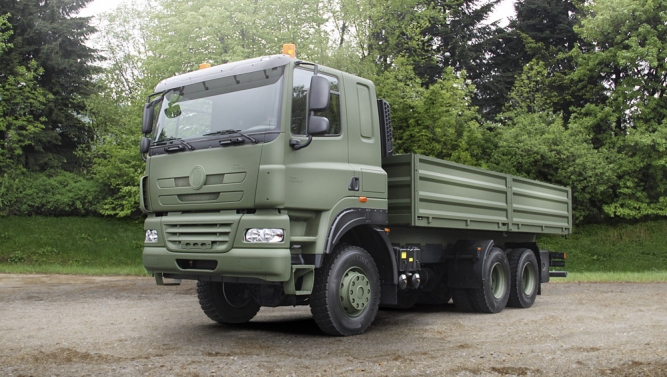 TATRA PHOENIX has been presented for the first time as a cargo/troop carrier at the international defense exhibition IDEB 2012 in Bratislava. The chassis designed for installation of various superstructures with the designation T 158-8P5R33 391 6x6.2 in typical olive finish is a so-called commercial off-the-shelf (COTS) product. These are vehicles with minimal modifications vis-à-vis the stock version, suitable for operation in demanding off-road conditions.

TATRA PHOENIX vehicles, based on unique TATRA concept with central load-bearing tube, are fitted with pneumatic suspension on all axles as standard. It is the very same system used in the special vehicles of the TATRA 815-7 line. Therefore, the same driving comfort is retained and driving properties are at a very similar level.

The new, supplementary line of heavy trucks designated for the defense and military segment represented by the TATRA PHOENIX vehicles is especially suited to use for military logistics, for operating in difficult and extremely difficult terrain without risk of enemy fire and mine systems, and for operations in non-contaminated areas.

TATRAPAN 8x8 – a new armored container carrier developed by Slovak innovation specialist VÝVOJ Martin, a.s., has been presented at the TATRA – VYVOJ Martin joint exposition at IDEB 2012 as a premiere as well. This universal heavy-duty high mobility ISO container carrier uses the TATRA unique chassis for operations in all kinds of rough terrain.

The new model TATRA PHOENIX in “COTS” version will be also presented in June at prestigious defence exhibition EUROSATORY 2012 in Paris.