TATRA TRUCKS as a new owner of TATRA automotive company based in Koprivnice, will be presented for the first time at one of the most important defense exhibitions in the world – IDEX in Abu Dhabi. The relation with the Middle East countries is very important for this famous Czech automotive company and IDEX is a traditional place where the news about company's products are presented to customers. 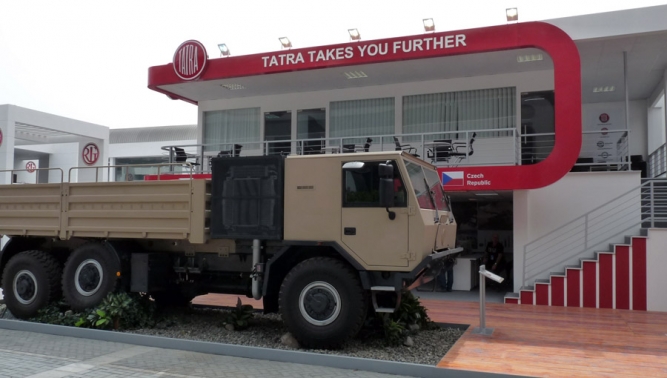 TATRA vehicles are being presented here since the beginning of IDEX. TATRA TRUCKS brings to this issue of IDEX two exhibits that will also start to serve as demo vehicles in Kingdom of Saudi Arabia. This country belongs to countries where the most of TATRA defence vehicles was exported in 2014, with focus on product line T810. This product line is going to be completed also with the other TATRA vehicles in KSA as well as in the countries of Middle East region.

TATRA PHOENIX that was introduced in 2011 as a result of cooperation with DAF TRUCKS N.V. will take a certain place in the TATRA offer. This product line will be presented at IDEX for the very first time. The producer has decided to show this new model as an all-wheel-drive 6x6 tractor for different purposes. The base of this truck is TATRA unique chassis with independent swinging half axles suspended by air. The comfortable cabin that is available in version "day cab" as well as the version "sleeper cab" is supplied by DAF. The water-cooled 12.9 liters engine PACCAR MX is available in four power version – 265, 300, 340 and 375 kW and can be completed with ZF 16-speed manual or automated gearbox. There is also available a full automatic gearbox Allison on demand. TATRA PHOENIX is also equipped with TATRA transfer case that brings the power to the driveline inside of TATRA backbone tube.

The second exhibit is the model TATRA 815-7, also in the drive version 6x6 with a platform as a cargo/troop carrier. This vehicle is also build on TATRA unique chassis, all axles suspended by air. This solution allows to the vehicle go with a high speed even in a rough terrain. This model is equipped with Cummins ISLe 375 engine of the 276 kW output and TATRA 10-speed automated gearbox. The wheels are equipped with central tire inflation system that allows to fill in/out the tires by the driver from cabin. The cabin is produced in TATRA and due to its design can be very easy armored.

In the TATRA stand that will be places in Capital Plaza, position CP 420 will be presented also other companies belonging to the ownership structure of the major shareholder – EXCALIBUR ARMY, KARBOX and MSM Martin.

EXCALIBUR ARMY is the leading Czech company in the field of military equipment, spare parts and ammunition maintenance, overhauls and production. Their most important products are the Jackal IFV and the DANA-M1 CZ self-propelled howitzers. Years of experience in repairs, maintenance, logistics and their emphasis on quality put EXCALIBUR ARMY among the best Czech defense industry companies.

KARBOX is the Czech producer of containers and box extensions. Apart from the containers, KARBOX produces technologically superior interior equipment based on customers' demands. There is a wide range of specialized containers and container extensions on offer, from offices to the laundry rooms to the mobile army hospitals.
Slovakia will be represented at the exhibition by MSM Martin, which focuses on the repairs and production of military technology, weapons, ammunition and equipment. The company is known for designing, developing and delivering of complete technology solutions for the entire life cycle of their products.

Companies EXCALIBUR ARMY, KARBOX and MSM Martin belong to the EXCALIBUR GROUP holding, which associates Czech and Slovak security and defense industry companies and is a direct successor of the successful tradition of Czechoslovak and Czech weapon production.