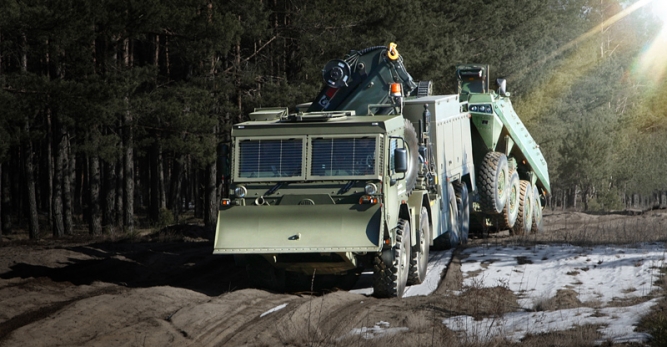 BRNO (May 10, 2011)
The Kopřivnice-based company TATRA, a.s., has today, within the international exhibition of defense and security technologies IDET 2011 held in Brno, introduced its entire range of firefighting and military vehicles, unofficially known as the 7-series. The company has also introduced its newly produced T815-7Z0R9T 44 440 8x8 chassis type.

The cornerstone of the presentation given by the Czech truck manufacturer TATRA, a.s., at the international exhibition of defense and security technologies IDET 2011 is represented by a range of special T 815-7 vehicles. The standard range of vehicles, unofficially known as the 7-series, is designed for use in extreme climates and terrains, on peace missions and for combat use in military conflicts. The chassis is based on a design using a rigid backbone tube with independently suspended swinging half-axles. Besides traditional "7-series range" models, the IDET 2011 exhibition also features a display of a TATRA's brand-new T815-7Z0R9T 44 440 8x8 chassis type.

The newest product presented by TATRA at the IDET 2011 exhibition is a T815-7Z0R9T 44 440 8x8.1R chassis. It is a part of the special recovery truck KWZT-1 Mamut produced by a Polish manufacturer Pojazdy Specjalistyczne Zbigniew Szczesniak, Sp. z o.o. This recovery vehicle can be used for all existing and future wheeled tactical means – to recover them, to help them reach inaccessible places and, using a highly mobile trailer intended to transport completely immobile wheeled vehicle systems and their versions, to carry them to determined destinations. Using a massive towing device – a fork dimensioned for a load capacity of 4 tons, the vehicle is also able to tow wheeled tactical means. Moreover, this special truck is equipped with a 44 tm remote-controlled hydraulic HIAB crane arm. The vehicle high mobility and ultimate ability to overcome both artificial and natural obstacles are a result of an excellent chassis design with a backbone frame and independently suspended half-axles, which is known as the "TATRA vehicle concept". At the International defense industry show 2010 held in Kielce, this Polish producer's vehicle was awarded a DEFENDER prize.

AnotherTATRA product, the TATRA 815-731R32/411 chassis, is introduced at the IDET 2011 exhibition as a base of the CAS 30 water tender designed by the THT, s.r.o., company headquartered in Polička, Czech Republic.

The TATRA 815-731R32/411 chassis, equipped with a directly air-cooled eight-cylinder V-configuration TATRA engine, which has maximum performance of 325 kW/442k and meets EURO 5 SCR emission standards, benefits from standard and highly evaluated features of the backbone frame, independently suspended half-axles and a low, modern cab. The TATRA vehicle concept allows bodies/superstructures to be mounted without necessity to use a sub-frame. The result is a water tender with a low center of gravity, excellent performance both in rough off and on-road conditions, as well as accessibility without need for boarding platforms.

In cooperation with THT Polička experts, we also developed a water tender design based on a two-axle TATRA 815-7 4x4 chassis with a directly air-cooled TATRA EURO 5 SCR engine with maximum  performance of 280 kW/381, maximum torque of 1,800 Nm and an electronic TATRA-NORGREN gear-shifting system. The special T 815-7 4x4 firefighting vehicle, as well as its larger 6x6 version, benefits from excellent performance of the T 815-7 range based on a sophisticated design concept of TATRA vehicles. The special three-axle and two-axle trucks complement one another for various operation purposes and the TATRA company's offer thus includes a conceptual design solution of fire-fighting vehicles represented by the range of fire water tenders built on T 815-7 chassis in cooperation with the THT Polička company.

Besides the T 815-7 8x8 recovery vehicle and the special firefighting and rescue truck CAS 30, the TATRA display in Exhibition Hall "P" also includes special T 815-7 4x4 vehicles with a platform body, a T 815-7 8x8 container carrier with a special container fuel tank with  anti-ballistic protection, or a T 815-7 6x6 chassis with container cross members. The "7-series range team" also includes the T 810 truck as a representative of a successful customer project carried out for the Czech Army. After several years of operation in the most difficult army conditions, it is obvious today that the T 810 built on a ladder frame with original portal TATRA Rigid axles has proved its excellent performance, making it a proud standard-bearer for the TATRA design philosophy. Thanks to the performance, high utility value and low operating costs of the 3-axle T 810 6x6, this model was added to the TATRA civilian range last year. In addition to the static vehicle displays, the TATRA presentation at this year's IDET 2011 will also include, as a part of the exhibition accompanying program, a dynamic demonstration of two special-purpose T 815-7 8x8 vehicles at the event's test track.