For drivers of special TATRA racing trucks the beginning of the year is always connected with two important marathon-type rallies: the Africa Eco Race and the Rally Dakar. The former is held in Africa, while the latter is in South America. 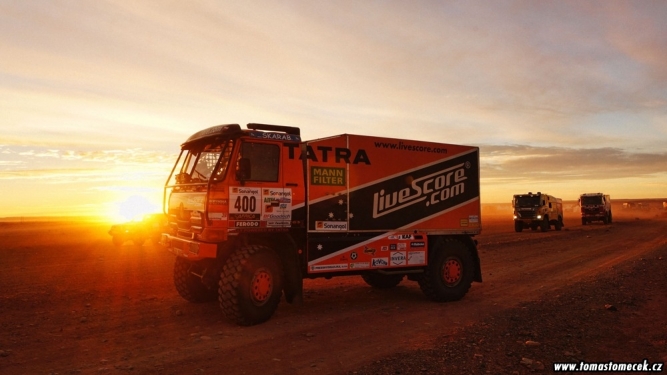 On 27 December 2013 Tomáš Tomeček and his navigator Vojtěch Morávek, both of the Letka Racing Team, set off on their African odyssey. This year’s edition of the Africa Eco Race started in Morocco on 31 December 2013. Leading through Mauritania to Dakar, Senegal, the 5796 km route follows the footsteps of the Paris – Dakar Rally founder Thierry Sabine.

The sixth edition of this race has seen an increasing number of fans and also shows much wider media coverage. The magic of racing in Africa is still simply tempting - the spiritual father of the rally, René Metge, who was also at the birth of the original Paris – Dakar Rally, knows that as does Tomáš Tomeček, who can tell stories about the adrenaline and released endorphins that these rallies bring about. First he took part in the Dakar rally in 1995 as a navigator in Karel Loprais’s winning crew. In 2012, Tomeček won the Africa Eco Race, last year he finished second. He says of this race:  “I really like the atmosphere of this event. I will do my best to come back next year, because, in my opinion, you can only see such places in Africa”. And Tomáš is there again experiencing his African adventure in TATRA 815 DAKAR LiveScore.

The TATRA TRUCKS company is keeping their fingers crossed for Tomáš Tomeček and Vojtěch Morávek and wishes them the best of luck!