In connection with international Dakar-type rallies, the TATRA TRUCKS company has given a green light to the cooperation with a Czech company called Power Sports Enterprises, known under the competition name of BUGGYRA. 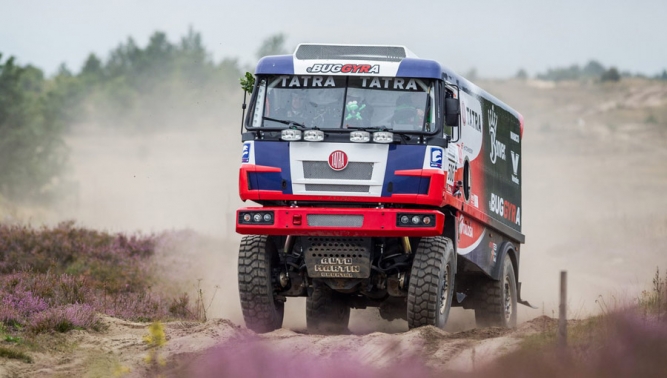 The primary objective of the cooperation with the ambitious Buggyra is to ensure continuity in the development of racing technology under the TATRA brand. Within this cooperation, TATRA TRUCKS a.s. is responsible for supplying mechanical components of chassis and providing necessary product knowledge, while Buggyra will test, and above all develop and implement state-of-the-art racing technology. It is worth mentioning in this respect that many technical improvements which were later integrated in the design of serially made models were, at their initial stage, firstly used on special TATRA racing trucks. The best recent example of the Kopřivnice truck company is the air suspension on front axles. Originally, it was mounted on the front axles on special racing trucks; now, the front axles of the latest TATRA model – the T158 PHOENIX – are equipped with it as well. As a result of this technical solution, TATRA decreased the gross vehicle weight, increased the payload and at the same time contributed to increased comfort for the driver.

The best Czech racing truck driver of the last two Dakar Rally editions, Martin Kolomý, had an opportunity to test his special Dakar truck – TATRA 815 Buggyra – in mid-September in Senica, Slovakia. Now, the TATRA TRUCKS company is already preparing another truck for him. This one should be finished in the first few months of the next year and will only be used for testing purposes.

Radomír Smolka, TATRA TRUCKS’ Director of Design Engineering, has commented on the ambitions of the TATRA and BUGGYRA partnership saying: “Buggyra is a brand which has won the European Championship on racing circuits many times. They are able to make state-of-the-art trucks and engines.” The combination of the tried and tested TATRA chassis with the progressive Buggyra and talented Martin Kolomý has thus a potential to become an ideal partnership for the winning ranks, not only in the Dakar or Silk Way Rally, but also in the sales of all-wheel-drive off-road trucks.

After years of having its own factory racing team and giving some ongoing support to independent racing teams using TATRA vehicles for their activities, TATRA TRUCKS a.s. is now opening a new chapter of rally competitions with Power Sports Enterprises, s.r.o. , in which both of these brands will be striving for enhancing the goodwill of the Czech industry.