On 1st February 2017 former CFO Radek Strouhal will become CEO of TATRA TRUCKS after more than three successful years at the head of the truck maker's financial department. 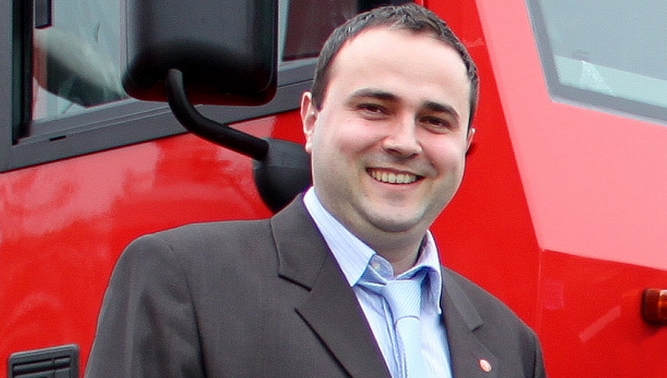 "Radek has been part of Tatra's management team since the current owners came on board. He played a key role in rescuing the company in terms of the financial management and negotiations with banks and other financial partners; he continues to manage both of these roles supremely well," says Petr Rusek, the chairman of TATRA TRUCKS and board member of CZECHOSLOVAK GROUP, on his appointment.

After a leap in production in 2016, Tatra is entering a period where the focus will be placed on optimizing costs, increasing labour productivity and associated investment in key corporate infrastructure. "Radek Strouhal is therefore taking up the position of CEO after he had largely resolved these priorities in his previous position," explains Petr Rusek.

Having fulfilled his key task to increase production year-to-year from 900 to 1,300 vehicles, Martin Bednarz is leaving the position of CEO of TATRA TRUCKS. Under his leadership, the truck maker produced a total of 1,326 vehicles in 2016. Petr Rusek says: "We thank Martin Bednarz for his work in our company, especially for setting up production for the subsequent stabilization phase and we wish him much success in his future work."

In terms of human resources, Radek Strouhal's appointment is an expression of managerial continuity. He has been working for the truck maker continuously since the arrival of the new owners, Czech entrepreneurs Jaroslav Strnad and René Matera, in whose PROMET GROUP holding company he worked as Chief Financial Officer before joining Tatra. He has been a TATRA TRUCKS board member since October 2013.

Radek Strouhal's successful business economics management is evidenced by a huge shift of TATRA TRUCKS in its financial rating. From the position of a partner with very high financial risk at the time of the takeover by the new owners in the spring of 2013, the company has managed to move into the best green zone with a low risk of credit default already by mid-2014. According to the international Coface agency, the credit rating of TATRA TRUCKS in 2015 was a seven out of a possible ten.

Radek Strouhal adds: "Standing at the head of the third oldest automaker in the world is a great honour and responsibility for me. Tatra will undertake another increase in production, but hand-in-hand with increased productivity. Tatra's growth will be supported by hundreds of millions in investment, including the project of restructuring the middle tract that will transform Tatra into a modern industrial building in terms of internal facilities and outer appearance. I will put great emphasis on human resources and positive employee motivation not only in manufacturing but also in Sales and other departments. The company was rescued through the teamwork of all "Tatrovaks", now the long-term development begins."

The CEO of TATRA TRUCKS Radek Strouhal (34) is a graduate of the Faculty of Economics of VSB - Technical University of Ostrava in the field of finance. He began his career in PROMET GROUP, where he worked from 2006 to 2013. He began as a risk manager; later he worked as Head of Finance and Controlling, and the last four years before joining Tatra he was Chief Financial Officer. Within PROMET GROUP he was heavily involved in acquisition projects, e.g. the acquisition of KOFING a.s. in 2009, or the acquisition of Tawesco s.r.o. in 2011.

Since the beginning he has worked in the team responsible for the ownership takeover and rescue of the Kopřivnice truck maker. In October 2013 he was appointed Vice Chairman of TATRA TRUCKS a.s. and CFO. He will start as CEO on 1st February 2017.

In 2011, he was nominated among the top ten best CFOs in the Czech Republic by the CFO Club Association. In 2015 he took third place in the CFO Club rating among Czech CFOs.

In 2013 TATRA TRUCKS acquired the world-famous Tatra truck maker, and after the change of ownership structure, carried out a successful restructuring. In addition to the standard model ranges they also produce special trucks tailored to customer requirements. Eighty percent of the production is intended for export. TATRA TRUCKS automotive company employs 1,350 employees at the parent company, while more than 600 work for the subsidiary TATRA METALURGIE, primarily focused on casting and forging. The turnover for TATRA TRUCKS in 2015 was CZK 3.7 billion, profit before tax was CZK 400 million. In 2016 TATRA TRUCKS produced 1,326 vehicles, meaning production has grown by more than 50 percent year-to-year.