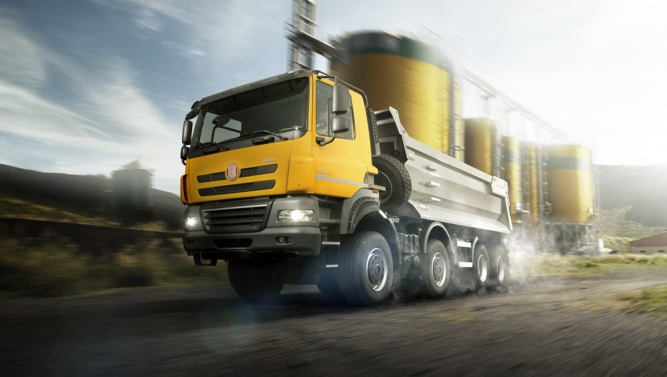 Kopřivnice / Kortrijk (November 27, 2011) – TATRA's newest vehicle, the TATRA PHOENIX , was the second highest rated truck in the overall standings of International Truck of the Year 2012, the latest edition of a prestigious annual international industry contest.

The results of the vote were revealed on the eve of the 14th biannual Trailer professional trade fair, Trailer 2011, in the Belgian city of Kortrijk.

This great result for TATRA is strengthened by the fact that the winning truck is classified as a long-distance haulage road truck. The second-placed new TATRA PHOENIX was thus the best-scoring all-wheel-drive truck for 2012 entered in the entire competition.

TATRA participated in the contest for the first time ever, with the voting conducted by a 24-strong jury of commercial vehicle journalists from across Europe.

The inclusion of the TATRA PHOENIX among the nominated best trucks for 2012 came about thanks to the patient, diligent endeavours of the entire TATRA, a. s. company. As a completely new heavy-duty truck, the TATRA PHOENIX received its public launch in the second half of this year. In line with long-term planning, mass production commenced during September. Thereafter, the new truck from Kopřivnice began winning valuable plaudits not only from target groups of customers, but also from truck industry professionals.

Thanks to its unmistakable handling characteristics which build on the tried and tested and continuously innovated "TATRA concept" backbone tube suspension system, and its high value added supported, among other things, by the application of several structural assemblies and products from renowned foreign manufacturers, the TATRA PHOENIX made a strong impact on the International Truck of the Year jury.

The International Truck of the Year accolade presented by the journalists was the 35th such annual award to have been bestowed. The contest jury was comprised of representatives of the most prominent and most successful industry magazines in Europe, representing a total monthly print-run of approximately 600,000 copies and at least an equal number of readers.

According to the rules of the International Truck of the Year organisation, nominations are restricted to vehicles launched during the past 12 months that contribute to road transport efficiency through undisputed technical innovations, user comfort, operational safety, fuel consumption economy, operational cost savings and, last but not least,  environmental friendliness.