In the Russian city of Surgut, nicknamed the Russian capital of oil, climate conditions as well as the terrain do not allow the building of roads, oil pipelines and special equipment in a conventional way. 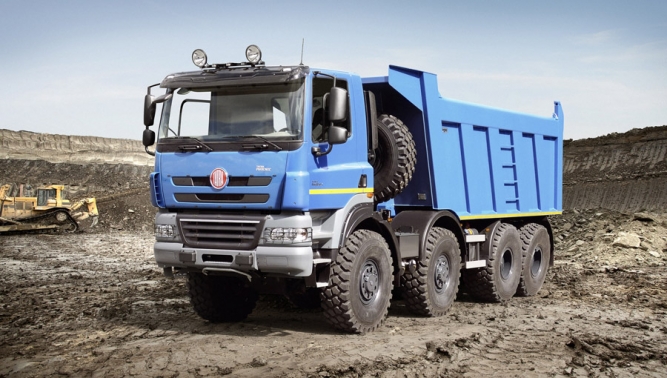 The technology, including trucks, is constantly exposed to extreme testing, which is later evaluated; successful products become a significant reference for all other mining companies, not only in the territory of Western Siberia.

A new TATRA PHOENIX model has also undergone such an important test. This model is a successor to the legendary TATRA trucks, a brand which prides itself on having a monument “for its merits” in Russia. The results of the difficult testing meant TATRA TRUCKS started to be considered as a significant bidder in the Surgutneftegaz company’s tender and the TATRA PHOENIX managed to win the tender for 8x8 trucks. Moreover, another supply will be shipped to the TATNEFT company. “The tender victory for 8x8 vehicles for Surgutneftegaz is a very important milestone for Tatra when entering the Russian market with its TATRA PHOENIX model range,” Jan Mesarč, Sales and Marketing Director for Eastern Markets, confirms. “The operating tests have verified that Tatra is able to offer a technical solution also for liquid-cooled engines for extreme climate conditions in Siberia. This modern product range enables us to satisfy the requirements of demanding customers who are happy to see the comeback of the traditional Czech brand,” Mesarč adds.

TATRA trucks were always very important helpers in Surgut. The sales of TATRA trucks to the Surgutneftegaz company have reached almost 1,400 units since 1994 with the year 2001 being the most successful one when TATRA won a tender for 250 vehicles. However, the sales started to go down gradually in 2006. Between 2011 and 2013, this mining company, being one of the biggest, saw quite an unpleasant failure in supplies of TATRA trucks; now, the traditional brand has started to regain its position on the Russian Federation market with its TATRA PHOENIX model range.

The family of the TATRA PHOENIX product range has gradually been becoming bigger and bigger since its production was launched in cooperation with the Dutch DAF TRUCKS company almost three years ago. Quite logically, the target markets of the first truck versions were local markets of the Czech and Slovak Republics. After that, an intensive development of other vehicle versions for key markets, which are Russia and Australia, followed.

The TATRA PHOENIX model range, which was awarded “2013 Innovation” at the Kom Trans exhibition in Russia, uses the unique modernized TATRA chassis concept consisting of the central load-carrying tube and swinging half-axles. The most significant chassis upgrade included the implementation of air suspension on all axles, which had a radical impact on the vehicle performance – it improved the driving comfort and accelerated the transportation speed in off-road conditions. Due to the partnership with DAF TRUCKS, the TATRA PHOENIX has a spacious cab from the CF range and a modern 12.9 l six-cylinder PACCAR MX engine, which is available in four power versions: 265, 300, 340 and 375 kW. The main benefits customers will appreciate in this liquid-cooled engine are its economy and reliability. Particularly, the operating costs in the form of decreased fuel consumption persuaded even staunch fans of air-cooled TATRA engines. A manual or automated transmission, a 16-speed ZF transmission and a one-speed or two-speed TATRA transfer case complement the powertrain to the full user satisfaction. A new feature, which is under intensive testing in operating conditions, is a six-speed Allison transmission, the installation of which is strictly required by Australian customers, and also more and more frequently  by mining companies in Russia.

Adaptation of TATRA PHOENIX Trucks for the Russian Market

As regards the design of the TATRA trucks for the Russian market, the greatest attention and care was paid to the development and the devising of elements guaranteeing operability and starting ability of the liquid-cooled PACCAR engines, which require completely different technical solutions to the air-cooled TATRA engines. As a result, a complete set of measures called the “Arctic Kit” was designed; it is possible to use individual elements of this ”kit” or they can be combined according to the climate conditions, simply according to what freezing temperatures the vehicle will be operated in. The “Arctic Kit” includes features such as a heated fuel filter, an additional fuel pump, an independent heater for heating the coolant, an engine pre-heater, a pre-heater for the bottom cover of the transfer case, a battery box pre-heater connected to the engine cooling circuit (this means the batteries are also heated during drives), an electric battery charger with the possibility to connect to an external electrical network, an electric pre-heater for the engine block, heated AdBlue line hoses, an AdBlue tank pre-heater, etc. For Russia, in principle, it is a must to use independent heating in the cab. Finally, the standard packet also includes the so-called “muff” of the grille and a bumper for both additional insulation of the front cab part and for shielding the cooler from the direct blast of freezing air.

All the elements as well as the prototypes have been tested in two stages. The aim of the first one was to verify the working of all the elements of the “Arctic Kit” and was held in a freezing box of the TATRA TRUCKS Test Rooms in the Czech Republic and subsequently in the freezing labs in Slovakia, where the entire vehicle was tested in temperatures up to -45 °C, where the whole vehicle was exposed to the target freezing temperature for the entire day (gradually from -20 °C, over -32°C to -45°C). After that, the engine starting attempts followed. At temperatures of -32°C it is necessary to use the independent water heater for heating the engine, coolant and the battery box.

The second stage of testing was carried out directly during real operation in Russia, again in two consecutive steps. The first vehicle, type number 8PR32, was sent to Russia for testing as a model of a low weight category of 6x6 tippers up to the GVW of 30 tons; the parameters of this model are more or less the same as those of the popular T815 S01 trucks and can thus be considered as their replacement. The truck in testing was equipped with a 265kW engine, a manual ZF transmission, a one-speed TATRA transfer case and leaf springs on the rear axles. Of course, the truck’s features included the “Arctic Kit” and heating of the one-way tipping body by exhaust fumes. The vehicle was handed over to the Avto-Kvin company in Nizhnevartovsk in cooperation with ATT Moscow, a Russian TATRA dealer. The testing started in January 2013. The dates of testing were scheduled to include the most extreme winter frosts, the subsequent spring muddy season and the beginning of the summer, when the roads get extremely dusty. After the monitored period of operation ended (within six months of testing, the vehicle reached a mileage of 43,000 km, a greater part of the mileage was covered with a trailer), the vehicle is still intensively used and during the last inspection visit of January 2014 the odometer reading was 90,000 km; during this time there were not any serious breakdowns or defects. Following these successful tests, the Avto-Kvin company purchased another two TATRA PHOENIX tippers.

According to the agreement between TATRA TRUCKS, its dealer - the ATT Moscow company - and the Surgutneftegaz company, the second test started at the end of October 2013. In contrast to the first testing, this time a vehicle from the “other end” of the TATRA PHOENIX product range was prepared – an 8x8 one-way tipper (type 8P5R46) with a GVW of 50 tons (payload of 32 tons). This vehicle’s features included hub reduction gears and a central tire inflation system, a 340 kW engine, a manual ZF transmission and a two-speed TATRA transfer case. With the full “Arctic Kit” packet and a heated tipping body, almost the maximum that the TATRA PHOENIX product range can offer, this is a real flagship of TATRA TRUCKS; additionally, the truck might be upgraded with a more powerful 375 kW engine and an automated ZF AS Tronic transmission or a fully automated Allison transmission.

“The test in Surgut is really a “survive-or-die” test or maybe a “survive-the-frost” test, and not only with respect to the climate conditions. The vehicle has been added to the system of a fixed-route operation with drivers constantly rotating in regular shifts. The trucks are, in fact, in constant operation, which also the mileage shows – 60,000 km in a three-month operation. Every 30,000 km, the truck undergoes a regular inspection by a TATRA TRUCKS mechanic. The full testing is scheduled for six months during which the TATRA trucks are used for 120,000 km in very difficult conditions,” Radomír Smolka, the Design Engineering Director of TATRA TRUCKS says, and adds: “Naturally, all the findings and experience from the operation of not only the earlier mentioned trial vehicles, but also other TATRA PHOENIX product range vehicles which had been exported to Russia before, but not to such extreme conditions, are important to our designers as well as to all TATRA TRUCKS employees because future sales to this traditional sales territory of ours depend on the quality, not solely on the design.”

On 1 October 2013, Petr Karásek, an experienced crisis manager, joined TATRA TRUCKS a.s. and took up the office of Chief Executive Officer. Before that, he together with other experts prepared a strategy to stabilize the company and ensure its further development. Under his leadership, TATRA TRUCKS a.s. has already been running according to the approved restructuring plan for six months. The company’s number of positions has been reduced by more than 100 since then. On 1 January 2014 the parent TATRA TRUCKS company employed 952 people, its subsidiaries, a foundry and a forge, about 600.