Being the first one, defeating everybody, leaving the competitors behind – these are the feelings Tomáš Tomeček and Vojtěch Morávek, driving in a special TATRA T815, are enjoying as winners of the 2014 Africa Eco Race in the truck category – and the Tatra people are enjoying it with them. 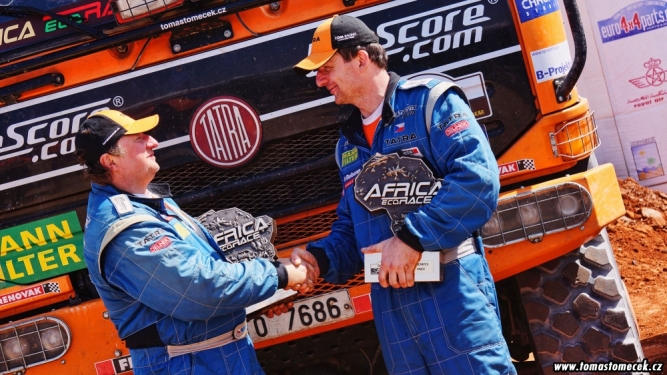 “So, we’ve made it! Hurray! Long live Tatras! Tom,” Tomáš Tomeček tweeted on 11 January 2014 confirming his victory after the final stage and a parade at the Pink Lake, 40 km north of Dakar, Senegal. This year the race has been dominated from start to finish by Tatra with No. 400. Everything worked well. Tatra made it, Tomáš Tomeček drove fantastically, Vojtěch Morávek took full advantage of his many years of experience as a navigator and even luck was on the side of this crew.  So, TATRA TRUCKS can only congratulate Tomáš Tomeček, Vojtěch Morávek and the entire team on the third victory in this unique rally. Well done!