Visit to Tatra Kopřivnice by the Chief of General Staff

Accompanied by other officials of the Ministry of Defence of the Czech Republic and the Czech Army, the Chief of General Staff of the Czech Army, Army Gen. Josef Becvar, visited the TATRA TRUCKS truck maker and TATRA DEFENCE VEHICLE arms factory in Koprivnice. 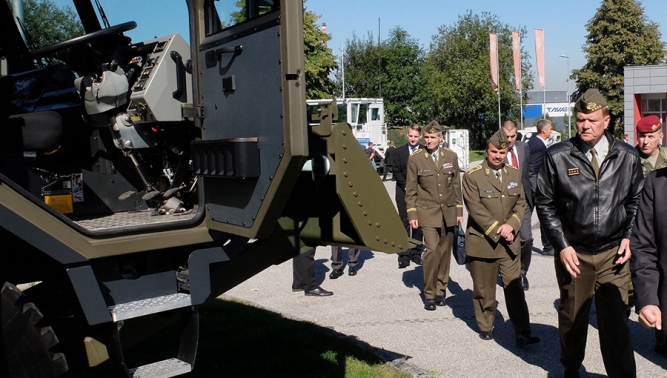 The visit began with the presentation of the current projects of TATRA TRUCKS for the Czech Army, with follow-up discussions. Tatra is currently working to meet the supplies of several dozen special chassis for weapon systems and logistic vehicles on the middle platform TATRA TACTIC, formerly known as T 810, as well as on the heavier platform TATRA FORCE, formerly known as T 815-7.

The presentation was followed by a showing of the current technology portfolio for security forces, which are produced in Koprivnice. The TITUS armoured vehicle, TATRA FORCE 8x8 PRAM logistics vehicle with an armoured four-door cab and hydraulic folding tailgate to transport 120 mm mortars, TATRA FORCE 6x6 dropside truck, and TATRA FORCE 6x6 CAS 30 fire truck were presented at the event in the form of stationary and driving examples. The ability of TATRA chassis to carry also heavy weapon systems was demonstrated with a modernized self-propelled DANA M1CZ gun howitzer.

Apart from TATRA TRUCKS products, the military hardware and equipment produced in the TATRA DEFENCE VEHICLE armoury was also presented to the commanding corps of the Czech Army: The Pandur II 8x8 wheeled armoured vehicle with remote-controlled TURRA 30 tower and another Pandur version armed with a heavy mortar. At the end of his visit, the Chief of General Staff and his retinue also inspected the production lines of both Koprivnice enterprises with the Tatra word in their title.

The Chief of General Staff of the Czech Army, Army Gen. Josef Becvar, said: "Today's conflicts demonstrate the importance of the domestic defence industry, because in crisis situations you cannot fully depend on supplies from abroad. The Tatra chassis have reliably served in the army since the times of the First Czechoslovak Republic and today's visit to Tatra has convinced me that this will continue to happen the future."

The CEO of TATRA TRUCKS Martin Bednarz said: "Although most of Tatra's production is destined for export, the Czech Army is a reference and valued member for our products. We are ready to continue to fulfil our role as a strategic supplier of chassis on which the fleet of the Czech Army is built. Similarly to other advanced NATO countries, the Czech army has the advantage of strong domestic suppliers and therefore independence from imports from abroad for key automobile technology and hardware."

In 2013 TATRA TRUCKS acquired the world-famous Tatra truck maker, and after a change in the ownership structure they underwent a successful restructuring. In addition to the standard model ranges they also produce special trucks tailored to client requirements. Eighty percent of the production is intended for export. As of the end of 2015, TATRA TRUCKS employed 900 full-time employees in the parent company and about 610 FTEs in two subsidiaries primarily focused on casting and forging. At the end of 2014, the sale of the new generation of TATRA PHOENIX Euro 6 was started. In 2015 the company produced 858 vehicles.

TATRA DEFENCE VEHICLE specializes in manufacturing, overhauling and modernizing of mostly armoured and special vehicles for domestic and foreign customers, for example PANDUR II 8x8 vehicles, tanks, Land Rover type vehicles. They will cooperate with TATRA TRUCKS in the production of armoured TITUS vehicles. From the perspective of the defence industry, the company is also significant in that they are the first completely new enterprise of the traditional defence industry established in the Czech Republic in more than past 25 years.