Denmark to purchase CAESAR howitzers on the Tatra chassis

The tender for new howitzers for the Danish army was awarded to the French company Nexter Systems for the CAESAR 8x8 on the Tatra chassis. Deliveries are to be made by the end of this decade. This is the first project where the Tatra chassis has been projected as a new weapons platform for a Western member of NATO. 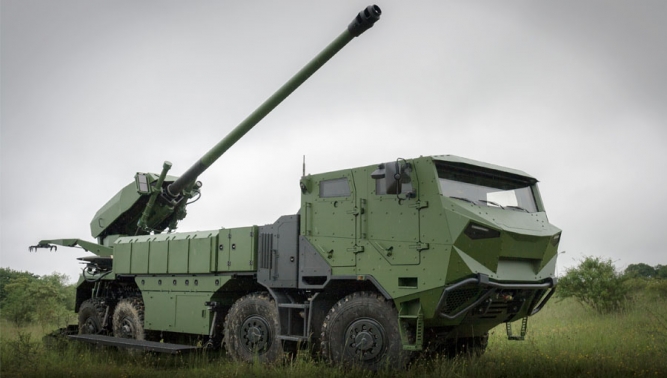 The Danish Ministry of Defence announced that they have chosen the CAESAR 8x8 type offered by the French company Nexter Systems in a tender for a new self-propelled 155 mm NATO howitzer. In the final phase, the choice was between the CAESAR howitzer on a four-axle Tatra chassis and the Israeli-type ATMOS made by the ELBIT Corporation, also mounted on the Tatra chassis. The Danish army's order is for 15 howitzers with an option for six more.

The French arms maker NEXTER Systems is one of the three largest and most important European companies of its kind. The latest version of the 155mm CAESAR 8x8 howitzer on the Tatra chassis was officially unveiled recently. "After a jointly developed TITUS vehicle, it's another example of the successful cooperation between NEXTER Systems and Tatra," said the Chairman of the Board of TATRA TRUCKS Petr Rusek. The latest version of the CAESAR 8x8 howitzer is built on a four-axle TATRA FORCE chassis and in its basic configuration uses the entire drive train made by the truck maker from Kopřivnice. Specifically, the original eight-cylinder direct air-cooled Tatra engine, Tatra main transmission equipped with the semiautomatic TATRA-NORGREN gear-shifting system and auxiliary transmission (drop box), also Tatra-branded. The chassis is equipped with all-wheel drive and air suspension on all axles, which is unique for vehicles of this weight category.

"Thanks to its unique and exceptional concept with a rigid central tube and independently suspended half-axles, the Tatra chassis offers completely new possibilities for the CEASAR project and our customers. "It significantly expands the use of the weapon system not only in terms of its mobility, but also in its structural modularity and the possibility of using a substantially increased payload with a simultaneously higher horsepower-to-GVW ratio. These benefits were decisive in our choice of the chassis supplier," said Alexander Penley, the Vice President of NEXTER Systems for Europe and Central Asia.