We are approaching one of the most important exhibitions of defense technologies - IDET 2015 – which will be held from 19 to 21 May in Brno. Professional public and supporters of military equipment will be able to see the new armored TITUS vehicle we present as the Czech premiere as a result of the cooperation between TATRA TRUCKS and Nexter Systems. 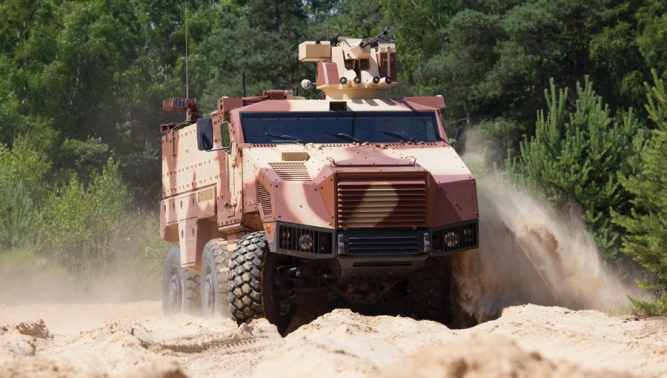 At this year's event TRUCKS TATRA will exhibit in a joint stand with EXCALIBUR GROUP and together they will present some exciting news at both the indoor and outdoor exhibitions.  The TITUS vehicle, besides its technical solution, is also interesting in the fact that TATRA TRUCKS will intensively participate in its production, in the case of interest shown by the Czech and Slovak Armed Forces. They are indeed the main contractor for the Czech and Slovak Army, and Nexter SYSTEM will fulfill the role of the supplier and licensing authority.

Through its unrivaled level of modularity based on combat missions kits, operational environment kits and a wide family of variants, TITUS® (Tactical Infantry Transport & Utility System) is able to fulfill the full range of missions from Infantry transport to combat missions, combat support and combat service support functions, in any kind of type of commitments likely to occur in full spectrum of conflicts, including hybrid and counterinsurgency environments.

TITUS® offers an exceptional mobility through its TATRA 6x6 chassis coupled with a 440Hp engine. Three axle chassis with first and third axle steered, combined with air suspension, offers to this vehicle speed and excellent comfort for the crew.

TITUS® carries three crewmembers (commander, gunner, driver) and ten-man squad. Optionally, the crew can be reduced down to two operators to accommodate a twelve-man squad in the rear compartment.

The vehicle can be equipped with a wide range of Remote Control Weapon Stations and weapon systems varying from 7.62mm to 20mm as well as with 40mm grenade launchers.
It is fully integrated within the C4I network.

TITUS® is equipped with top-class ballistic protection, which is modular and can reach ballistic level 2-4 according to STANAG 4569. Mine resistance capability is classified as level 4a-4b. The vehicle can withstand IED blasts of up to 150 kgs. Combined with state-of-the-art active and passive crew protection systems, TITUS is an armored vehicle of choice for the demanding scenarios of the 21st century.
There is a number of versions of the vehicle available, ranging from a classic IFV through a mobile command post, armoured ambulance to communications, maintenance and evacuation vehicles. For police purposes, there is a number of modules which can be used to quickly prepare a vehicle to fulfill specific roles, such as the SWAT module, the WCT module (Water Cannon Tank) or the riot control module.

Another interesting exhibit, which is also the result of the intensive collaboration with the renowned defense systems manufacturer, General Dynamics European Land Systems (GDELS), is a bridge set placed on the TATRA FORCE (T815-7) eight-wheeler equipped with a hook loader.
In the outdoor exhibition, visitors will be able to see a wrecking truck, built again on the chassis of the TATRA FORCE (T815-7), 8x8 truck series, in the position when towing the Pandur combat vehicle.
On a test track, which is located behind Hall Z, the visitors will not only see but also have the opportunity to test the functional prototype of TATRA TACTIC (T810) vehicle, in 4x4 version (all-wheel drive 6x6 version is successfully used by the ACR and Saudi armed forces)

Therefore we cordially invite you to visit our stand at IDET 2015!