On Monday 19 February, the Minister for Regional Development Klára Dostálová visited the Moravian-Silesian Region – and one of the stops on her itinerary was TATRA TRUCKS in Kopřivnice. The Minister met with representatives of the company, which has received EU funding to reconstruct and restore the unique historic 'Slovak Bullet' locomotive. 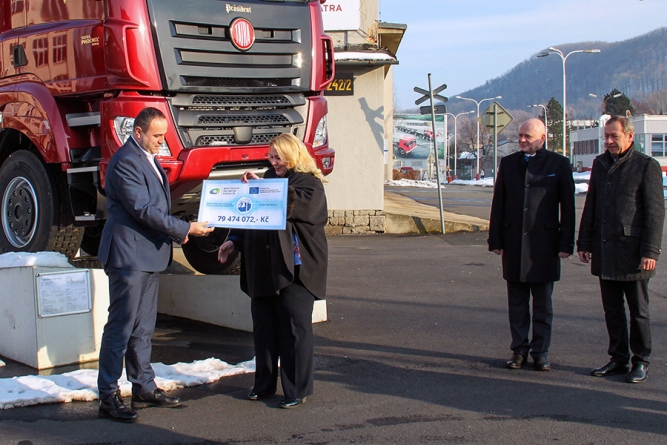 The TATRA T 68 diesel locomotive, nicknamed the 'Slovak Bullet', has been declared a national cultural monument in recognition of its importance as an outstanding example of the Czech Republic's technical heritage. In mid-January 2018 the company's funding application for the restoration was approved, and the Minister's visit to the Region represented an ideal opportunity for her to present Tatra CEO Radek Strouhal with a symbolic cheque for almost 80 million CZK (the precise sum is 79 474 072 CZK).

Dostálová expressed her strong support for the project: "There are moments when it's a great pleasure to present a funding cheque – and the restoration of the 'Slovak Bullet' is one such moment. If the company and the Moravian-Silesian Region manage to successfully complete the new TATRA automobile museum – and I have been assured that they will – it will be a phenomenal project, which will help to raise Kopřivnice's profile and attract new visitors to the town. I presented the company with a symbolic cheque for the restoration of the locomotive and the construction of an exhibition pavilion for it – and we also met with representatives from the company, the Region and the Town of Kopřivnice. The Region is coordinating the museum project, and the Town is in charge of a project to revitalize the land at the planned museum site. I am delighted that the Ministry of Regional Development is able to help implement this project by providing EU funding."

TATRA will use the funding to completely restore the historic train to a fully functioning state, as well as building a special exhibition pavilion for it, to be located next to the planned TATRA automobile museum. CEO Radek Strouhal commented: "For us, the project represents a recognition of our work – of the TATRA company, our long and proud heritage, and the talented team that is planning the restoration project. The funding we have received will enable us to restore the 'Slovak Bullet' to its former glory – and above all, to make it fully functional once again. In cooperation with the Ministry, the Region and the Town of Kopřivnice we are creating a museum which will be a major visitor attraction, and we are confident that it will boost interest in technical education among young people – which will ultimately help us to recruit the next generation of talented TATRA staff."

The total cost of the project is 118 million CZK; TATRA TRUCKS will also be contributing its own funds. The plans for the exhibition pavilion have already been drawn up; when restoration work is complete, the pavilion will be used to display the train. The funding approval also means that TATRA can now announce a tender for a contractor to carry out the restoration work.

In the middle of last year, funding was also approved for a brand-new TATRA automobile museum. The new museum will be run by the Moravian-Silesian Region as a branch of the Nový Jičín Regional Museum. TATRA TRUCKS has donated a site for the new museum – including a former foundry building. The company will also allow the museum to use the adjacent land, as well as donating its valuable collection of unique vehicles – which could not previously be displayed due to a lack of space. The exhibition at the new museum will be created in close cooperation with the current Tatra Technical Museum. The planned costs of the new museum are 123 million CZK, of which 85% will be financed via EU funding. The goal of both projects – which are scheduled for completion during 2020 – is to raise public awareness of the unique contribution made by the TATRA company to the development of our technical heritage, as well as conserving this heritage for the benefit of future generations.