Despite the pandemic and worldwide decline in the automotive industry, the Kopřivnice-based Tatra Trucks have achieved their production goals and fulfilled their commitments to customers. In total, they delivered 1,186 trucks to their customers. In 2020, they also celebrated their 170th anniversary and won a major contract in Germany. 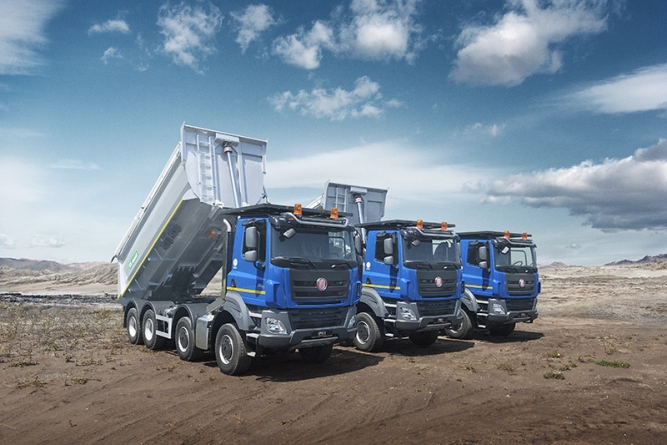 In sum, the Kopřivnice truck maker produced 1,181 and sold 1,186 trucks in 2020, out of which almost 60 percent went to exports and over 40 percent to the Czech and Slovak markets. In terms of production, TATRA TRUCKS managed slightly exceed their plans for 2020. "For 2021, TATRA plans a comparable volume of production and sales to that of 2020. We are constantly expanding our portfolio of customers and projects in order to achieve this goal. However, we are also working with the option that customers may postpone some of the projects to a later date due to the epidemic," said Pavel Lazar, CEO and Chairman of the Board of TATRA TRUCKS.

In 2020, TATRA TRUCKS won new orders together with partner companies and produced some unique vehicles. Above all, there was the delivery of 41 TATRA FORCE 4x4 special fire trucks, with an option for another 5 units for fire brigades of the federal state of Brandenburg, where TATRA TRUCKS cooperates with their long-term partner THT Polička. This is the first such large order for TATRA fire trucks in strongly competitive Germany. Already at the beginning of the year, TATRA TRUCKS cooperated with Excalibur Army and THT Polička to deliver the Fire and Rescue Service of the Czech Republic with two special fire trucks - a tanker-type rugged CZS 15 Triton fire truck and CV 40 large-volume tanker, which are unique in their categories.

In defense technology, representatives of TATRA EXPORT and Huta Stalowa Wola signed an agreement in September of last year at the MSPO defense fair in Kielce, Poland, to offer the Polish Army the TATRA 4x4 armoured vehicle project. Deliveries of TATRA trucks for the Army of the Czech Republic also continued as per contracts signed in previous years. TATRA TRUCKS also announced that they plan to expand in the Brazilian market. In addition to expanding their cooperation with the Brazilian defense industry, a production plant should be constructed directly in Brazil this year to manufactrure TATRA trucks intended primarily for the local civilian market.

2020 was marked by the coronavirus pandemic, which affected a large part of the economy of most countries around the world. The pandemic hit the automotive industry with a particularly hard impact. In this context, the vast majority of car and truck makers in Europe have suspended their production for some time and have had to deal with problems associated with it and with production declines. TATRA TRUCKS in Kopřivnice was one of the few companies that did not stop their production line. It ran at full speed throughout the year even while corporate management introduced strict hygiene and safety measures.

This allowed the truck maker to secure the protection of its employees' health and at the same time fulfill their commitments to their customers. "Despite not yet presenting our financial results, we can say that our well-established organizational arrangements and mutually friendly cooperation with all business partners have let us not only keep our production going without interruption, but also exceed our business and financial goals projected for 2020," said Miloslav Mahut, the Finance Director and Deputy Chairman of the Board of Directors of TATRA TRUCKS.

TATRA TRUCKS fulfilled their production plans and deliveries to customers even though they had to face certain difficulties. These arose mainly due to delays in the supply of components from a few subcontractors, where the pandemic and resulting restrictions caused manufacturing complications. The TATRA TRUCKS management solved the problems by regrouping its production plan and setting up a new sequence on the line. We also managed to provide full service and after-sales services to customers. In addition, the company set up a servicing package to support the operation of Tatra trucks used by the Emergency Service of the Czech Republic and the Army of the Czech Republic performing important tasks within the framework of government measures to protect the health of the population.

Last but not least, the previous year was also the 170th year of the Kopřivnice company's existence. In June, the company commemorated its founding in 1850, when Ignác Šustala started his business. TATRA TRUCKS can thus be proud of the longest continuous tradition of wheeled vehicle production in the world. In December, TATRA commemorated the 198th anniversary of the birth of its founder Ignác Šustala. At the end of the year, a demanding several-year reconstruction of the national cultural monument called "Slovenská strela", a motorized railway car manufactured by the Kopřivnice company in the 1930s, was also completed. This extraordinary railway car is to return to Kopřivnice in the first quarter of this year, where it will be exhibited in a modern pavilion in front of the new TATRA truck museum.