Home About the Company Press and Media News Tatra Trucks exceeded the plan for last year and sold 1,277 vehicles

In 2021, Kopřivnice-based Tatra Trucks sold more vehicles than planned and fulfilled its commitments to partners. It delivered a total of 1,277 vehicles to customers, won major military contracts in NATO countries, launched the development of a hydrogen-powered vehicle, and celebrated ten years of production of the Tatra Phoenix model line. 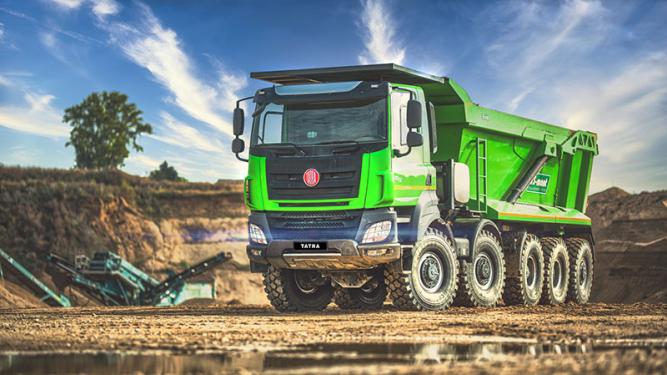 In 2020 (the year before last), Tatra was not forced to stop production for a single day despite the pandemic, and managed to meet its plan and sold 1,186 vehicles. For 2021, Tatra Trucks had planned to sell 1,220 vehicles but was actually able to increase this number and delivered 1,277 vehicles to customers. Of this number, approximately 40 percent went to the Czech and Slovak markets, the rest was for export. In terms of the proportion of vehicles produced, divided into the main segments, 40 percent were purchased by the civilian sector, 10 percent were sold to rescue service branches and 50 percent were supplied as part of military contracts. "Tatra had a very successful last year and this trend is expected to continue this year as well, since we see strong customer demand for our unique vehicles," said Pavel Lazar, CEO and Chairman of the Board of Directors of Tatra Trucks, and further added: "Last year, we also won breakthrough military contracts in Belgium and Germany, which can fundamentally help us to establish Tatra Trucks on a wider scale in the NATO military environment."

Significant army contracts
The contract for vehicles for the Belgian army represents the largest military project for Tatra not only in the last year, but also in recent years. Tatra Trucks, in cooperation with its partner DAF Trucks, will deliver 879 CF series logistics trucks on Tatra´s 4x4 and 8x8 platforms to Belgium. Petr Hendrych, Sales Director and Vice-Chairman of the Board of Directors, explained, "We will also assemble the vehicles. Another company from Kopřivnice, Tatra Defence Vehicle, which has developed and will produce armoured cabs, will also be involved in the project. In addition, at the end of last year, the Belgian Ministry of Defence concluded another tender for the supply of 9 8x8 heavy tractor-trailers and we were successful in it as well."

Last year Tatra Trucks also completed the delivery of three dozen Tatra trucks with hook loaders for the Czech army and is currently engaged in new wheeled self-propelled howitzers and air defence systems programme. Within this contract, Tatra will supply the army with the appropriate chassis. Tatra has also produced the first vehicles for the new MADR mobile 3D radars ordered by the Czech army, special STARKOM communication jamming vehicles and chassis for TITUS armoured vehicles. At IDET, Tatra representatives also signed a contract with the state enterprise VOP CZ for the supply of additional chassis for tankers also intended for the Czech Armed Forces. In 2021, Tatra also started deliveries of the first tens of Tatra Force vehicles to the Armed Forces of Ukraine.

Ten years of the Phoenix model line and new projects
In September last year, Tatra commemorated 10 years since the start of production of the Tatra Phoenix model line, which is the automaker´s flagship product for the civilian sector. The company has delivered more than 3,650 vehicles of this series to customers to date. In 2012, Tatra Phoenix won the title of the best all-wheel drive vehicle in the prestigious European International Truck of the Year award. It was the first time that a product from a Central or Eastern European automaker was nominated for this award and won this prestigious title.

Last year also marked the start of the development of a Tatra prototype with hydrogen propulsion. Within this project, the Kopřivnice-based company is cooperating with several Czech research organisations and universities, headed by the Institute of Nuclear Research Řež. "In the project, we will use a Tatra Force chassis in a special version designed for the mining industry allowing us to test the vehicle in the most demanding conditions. Tatra will also provide complete integration of all components and drive systems. If everything goes according to plan, the first prototype should be ready for testing at the end of this year," explained Radomír Smolka, Research and Development Director at Tatra Trucks.

Tatra Trucks also focused on and developed foreign projects in 2021. In the middle of the year, a new subsidiary Tatra Defence Slovakia was established in Trenčín, Slovakia. This company will be responsible for the production of chassis, cabs and certain types of superstructures for Tatra vehicles for the Slovak armed forces. Last year, the mass production of military versions of Tatra vehicles was also launched at a new industrial complex in Saudi Arabia. Tatra Trucks contributed to the project by transferring technology and production, providing consultancy services during the construction of the plant, and also helped with the construction of the production line and setting up production management. Currently, Tatra Trucks is supplying components and subassemblies for vehicles assembled in Saudi Arabia but gradual localization of production of certain parts is expected in the future.

Tatra vehicles helped, showcased at trade fairs and now have a new museum
After a long wait, a number of trade fairs and presentation events were finally held in 2021 and Tatra did not miss this opportunity. Potential customers, experts and the public were able to see Tatras in various versions, for example, at the IDEX trade fair in Abu Dhabi, IDEB in Bratislava, MSPO in Kielce, Poland, or at the IDET trade fair in Brno. Tatras were also present at static and dynamic demonstrations during the NATO Days or Bahna.

"One of the most important events of last year in the presentation of the Tatra brand and its long tradition was the opening of the expected new Muzeum nákladních automobilů Tatra (Tatra Truck Museum) in Kopřivnice and the nearby exhibition depository of historic motor train Slovenská strela in November. Both museum buildings and their exhibits showcased the history of Tatra Trucks and industrial production in northern Moravia," said Kamil Košťál, Marketing Director of Tatra Trucks. The museum belongs to the Moravian-Silesian Region, which contributed significantly to its opening both organizationally and financially. Currently, the museum is operated through the region´s contributory organisation, the Muzeum Novojičínska.

Tatra Trucks is also among the Czech companies that are fully aware of their social role and responsibility. The company demonstrated this commitment last year when it provided its own trucks to rescue services for free to remove debris and waste from tornado-hit areas in South Moravia. Employees of Tatra Trucks company also directly helped several local families affected by the natural disaster. Tatra also dispatched a technical support team with a Fire Rescue Service of the Czech Republic unit to assist in fire-ravaged Greece.

The highly successful Tatra do škol (Tatra to Schools) project, which helps technical education in secondary technical schools in all regions of the Czech Republic, continued. "Last year, students in secondary schools in Humpolec, Plzeň, Nový Bydžov and Valašské Klobouky assembled Tatra Phoenix vehicles, which were then put into service with regional organisations. The good news is that the Tatra do škol project is also expanding to Slovakia, with schools from the Trenčín region being the first to join," said Natálie Linhartová, HR Director of Tatra Trucks."