The prestigious Golden IDET Award was granted on the opening day at one of the most important exhibitions of defense technologies – IDET 2015 – which was held from 19 to 21 May in Brno. One of the awarded exhibits was the new TITUS® armored vehicle, presented by TATRA TRUCKS at the fair (first time in the Czech Republic) as a result of the cooperation with the French company NEXTER SYSTEMS. 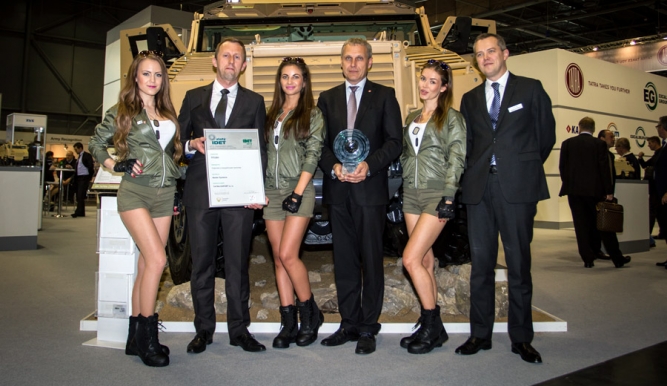 "We are pleased that the new armored vehicle, in the production of which we participated, attracted the professional jury of the fair and we are looking forward to when the customers will be able to check its qualities themselves," says the director of the TATRA TRUCKS defense programs Charles Ritschel, who collected the award at the gala evening at the Špilberk castle.

During his visit to the fair, the Minister of Defense Martin Stropnický personally inspected the exhibited new products from TATRA TRUCKS. On this occasion, he briefly spoke with the Chairman and Chief Commercial Officer of TATRA TRUCKS, Peter Rusek.

"The exhibited specials prove that Tatra is a very popular platform among foreign manufacturers of special equipment, mainly thanks to the quality of its unique chassis and also due to our ability to adapt it to the specific tailored requirements," says Petr Rusek.

At this year's IDET fair TATRA TRUCKS will exhibit in a joint stand with EXCALIBUR GROUP and together they present some exciting news at both the indoor and outdoor areas.  One of them is just the award-winning TITUS® vehicle, in the production of which TATRA TRUCKS will intensively participate, in the case of interest shown by the Czech and Slovak Armed Forces, as the company is the main contractor for the Czech and Slovak Army. NEXTER SYSTEMS would perform the role of a supplier and licensing authority.

Another interesting exhibit, which is the result of the intensive collaboration with the renowned defense systems manufacturer, General Dynamics European Land Systems (GDELS), is a bridge set placed on the TATRA FORCE (T815-7) eight-wheeler equipped with a hook loader.

In the outdoor exhibition, visitors will be able to see a wrecking truck, built again on the chassis of the TATRA FORCE (T815-7), 8x8 truck series, in the position when towing the Pandur combat vehicle. On a test track, which is located behind Hall Z, the visitors have the opportunity to see the functional prototype of TATRA TACTIC (T810) vehicle, in 4x4 (all-wheel drive 6x6 version is successfully used by the ACR and Saudi armed forces).

The joint-stock company TATRA TRUCKS has owned the world-famous truck maker Tatra since March 2013, when they acquired the company in an auction because of unpaid debts by the former owner of TATRA a.s. The new owners (Czech entrepreneurs Jaroslav Strnad and René Matera) and their key executives managed to resume production in the first half of 2013 and regained the trust of banks, subcontractors and customers.  Now with the Czech owners, the company is undergoing successful restructuring.

As of December 31, 2014, TATRA TRUCKS employs approximately 845 full-time employees in the parent company and less than 500 in two subsidiaries primarily focused on casting and forging. In 2014, revenues amounted to CZK 3.7 billion and the company sold 850 and produced 821 vehicles. The productivity of labor has increased by 66% YTD. At the end of 2014, the sales of new generation Phoenix EURO 6 vehicles were launched.