The new longest Tatra truck ever built serves in steelworks

The new special Tatra vehicle for the transport of threaded rods over 24 meters long is in trial operation since October in the Liberty Ostrava company, the steelworks that is part of the multinational GFG Alliance group. The truck is unique, because it is the longest Tatra vehicle in the more than 170 years long history of the Tatra Trucks company. Special modifications of the Tatra chassis were carried out according to its own technical design by the Partner Ipex company from town of Frenštát pod Radhoštěm, which is also a traditional dealer of Tatra vehicles. 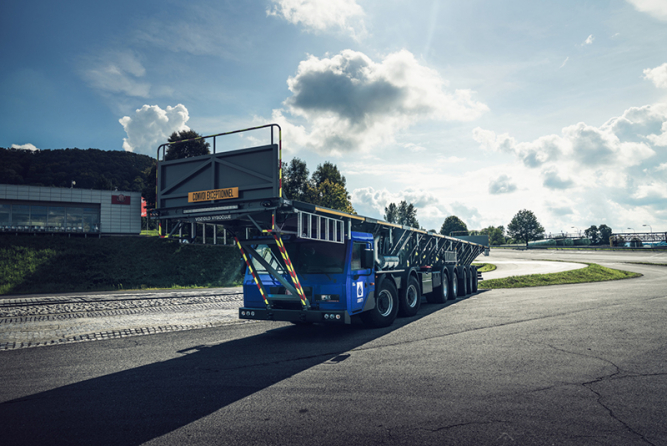 The demand for the purchase of a special vehicle arose in the company Liberty Ostrava, when at the beginning of last year, it was decided to move the final processing of threaded rods and their accessories from Luxembourg to city of Ostrava in Czechia. The aim was to increase the share of production with high added value. The vehicle, together with other technologies, such as special saws, was part of an investment in the total amount of 90 million crowns, which enables the final modifications of threaded rods in Ostrava.

"Bars with a final length of up to 24.2 meters are being rolled in our medium-rolling mill, now they will also be further processed in the service centre of threaded bars of the smelter in Ostrava. For their transport between these two operations, we ordered a unique conversion of the TATRA truck, because standard trucks usually carry products with a maximum length of 13.6 meters. As in the past, oversized trucks or railway wagons will transport finished products to customers in non-standard lengths," explained Pavel Suchánek, head of the Liberty Ostrava threaded rod centre.

The chassis for the unique TATRA truck with a total length of 25.3 meters was supplied by the TATRA Trucks company from town of Kopřivnice. Kamil Košťál, the TATRA Trucks marketing director, added: "The TATRAs are traditionally considered to be vehicles for difficult terrain and conditions, but in this case another unique feature of TATRA vehicles was used: the chassis with backbone tube with ability to build trucks for a various long load. Liberty Ostrava, as one of the most important metallurgical companies in the Czech Republic, is a customer reference for us, and the new truck is an example that TATRA vehicles are really suitable for various roles."

Conversion of a TATRA chassis into the unique vehicle, which was carried out by Partner Ipex from Frenštát pod Radhoštěm according to the technical design of its own design office, took about ten months, even under normal circumstances the normal period for special projects is at least one year. In this case, the work was further complicated by the Covid-19 epidemic and the tense situation in the automotive market. As well as the chassis and the implementation of the conversion, most of the subcontracting of the necessary parts was provided by manufacturers exclusively from the Czech Republic.

"We are pleased that we were able to implement such an interesting and unique project and apply our know-how of TATRA trucks modifications sphere. I would like to thank TATRA TRUCKS company for the production and delivery of the chassis itself on time and for the close cooperation in the subsequent special modifications. I am proud of our technicians and designers, who came up with a technical solution that made it possible to meet Liberty Ostrava's individual requirements for the specific use of the vehicle in in-house operation on the company's premises," said Vojtěch Svoboda, Partner Ipex Sales Director.

The longest TATRA vehicle in history has original TATRA backbone tube chassis with independent half axles and is equipped with an air-cooled, eight-cylinder TATRA engine with an output of 300 kW and an Allison automatic transmission. The drive of the air-suspended axles is 14x8, while the first four are driven, two front and the last three rear controlled. This allows the truck of above-standard length to go through curves on internal company roads. Part of the technical modifications was also the installation of a short modified cabin of the TATRA FORCE model line, thanks to which the vehicle has a small overall height. The loading surface of the flatbed platform can thus extend above the cab. The vehicle meets all parameters for operation on roads, but there is no assumption that it would be used outside the smelter area."